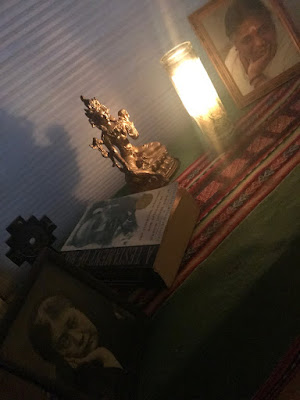 [NOTE: Remember the new start times, the Lodge Library opens at 6 p.m. and the weekly Lodge meeting begins at 7:00 p.m.]

Lodge Video Night: "Secrets of the Yogis of Tibet"

In Gratitude and Celebration of Baba Hari Dass

"There is an unspoken language. It comes from silence
and can’t be heard by the ears, only by the heart." -- Baba Hari Dass

The great Baba Hari Dass has passed on from this incarnation.
"Baba Hari Dass, the spiritual leader and silent monk who inspired thousands out of the Mount Madonna Center north of Watsonville, died Tuesday morning in his Bonny Doon home. He was Known by his students and devotees as Babaji — Hindi for 'respected father,' he taught yoga and meditation out of the Watsonville retreat center and school after moving to the U.S. from India in 1971. Babaji took a vow of silence in 1952, conversing only through his writings and a small chalkboard from which he would dispense terse-yet-profound utterances to those who sought his advice. Asked once by a Sentinel reporter to describe himself, he wrote simply, 'I am what people see me as.' Asked how should one live a good life, he would reportedly respond, 'Work honestly, meditate every day, meet people without fear, and play.'"  -- Nicholas Ibarra, Silent monk Baba Hari Dass, who inspired thousands at the Mount Madonna Center, dies at 95, Mercury News, 9/26/18

Hari Dass was a beloved friend and ally of the legendary American sages Joe and Guin Miller. Through the Millers, I had the blessing of two one-on-one encounters with this powerful being.

In the mid-1980s, Joe sent me down to Mount Madonna to ask Baba Hari Dass a question. Over a decade earlier, Joe had come across the term "Sphurana" in S.S. Cohen's Reflections on the Talks of Sri Ramana Maharshi. He felt it explained his experience with the gentle in-drawn breath into the heart -- in a way he hadn't come across anywhere else. So, in 1971, he wrote to Cohen, who was living at Ramana Ahsram, and shared what he felt the term meant. In response, Cohen wrote, "Sphurana only interests those who are very near the end of their spiritual journey. But to describe the Sphurana correctly, as you do, is the end itself." (See Great Song: Life and Teachings of Joe Miller, p. 19) Late one night sitting in the Miller's living room, Joe and I discussed that same passage from Reflections. It provided technical context of certain experiences I was having. Some weeks later, seemingly out of the blue, Joe said, "Go down and see old man Hari Dass, and tell him I said to ask him about Sphurana." So I drove down to Mount Madonna and Hari Dass graciously received me. "Joe said I should ask you what 'Sphurana' is?" On his chalk board, Hari Dass wrote, "You tell me." I described my experience, I shared what the term meant to me. Nodding enthusiastically, Hari Dass made a little sound several times in rapid succession, it wasn't a word, he didn't say anything, it was less than a syllable, it was just a sound made with his tongue, his teeth and his breath, but it might as well have been "yes, yes, yes." Looking back, I realize Joe had sent me because he wanted me to feel the same kind of validation that he had gotten from S.S. Cohen.

Two encounters, two big questions, two profound answers. But there is something else, something beyond description really, during each of the two encounters, after each of the two questions were answered, he laid down his chalk board, straightened his spine, placed his palms on his knees, and took a breath, and in doing so, he communicated the ineffable nature of samadhi, palpably; it was emanating from his countenance, from how he held himself, from his presence, through the silence itself. For a few moments, the air rippled, the veils fell away. Vast, vast, vast.

At our Friday Night Lodge Meeting on 9/28/18, we held an impromptu memorial for this great being. We shared stories. We viewed two wonderful digital artifacts on You Tube, first, What is Guru, a marvelous thirteen-minute slide show of photos from Hari Dass' life and work (with a beautiful soundtrack courtesy of Snatam Kaur Khalsa), and then Hari Dass Baba Doing Rare Mudra, a seven-minute video featuring Hari Das doing a powerful, flowing demonstration of sacred hand gestures. And of course, in our closing circle, we sang "Never the Spirit is Born."

[NOTE: We have embedded the videos below, so you from our blog site you can view them from inside this post, but if you are reading this via e-mail subscription, you will have to click on the links and watch via You Tube since embedded content doesn't carry through to e-mail.]

SFTS Lodge Dharma Message for September 2018: "It is false to speak of realisation ..."

"It is false to speak of realisation. What is there to realise? The real is as it is always. We are not creating anything new or achieving something which we did not have before. The illustration given in books is this. We dig a well and create a huge pit. The space in the pit or well has not been created by us. We have just removed the earth which was filling the space there. The space was there then and is also there now. Similarly we have simply to throw out all the age-long samskaras [innate tendencies] which are inside us. When all of them have been given up, the Self will shine alone." -- Ramana Maharshi, Be As You Are: The Teachings of Sri Ramana Maharshi, Edited by David Godman (1989).